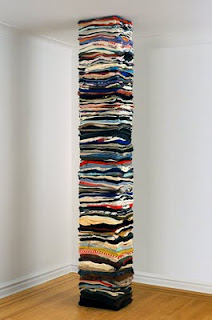 Derick Melander (exhibited with ADA gallery at Scope Miami last year and in Richmond this past May) is currently exhibiting at the Katonah Museum of Art and has just been reviewed by the New York Times in The Style Section (print) and in The Moment (blog). Both reviews include a photo of Derick's piece, which is titled "Where do you Begin". This sculpture, nearly 12 feet tall, is comprised of carefully folded, women's clothing and dates back to '03. Get there and see this piece!!! (show ends October 4th).

Derick isn't just an amazingly original & talented artist ( & folder of clothes) but is the sweetest, most genuine guy this little blue planet has ever produced! Am I laying it on thick? If you've ever met Derick , you'll know that I'm not. check out his ADA gallery page here...