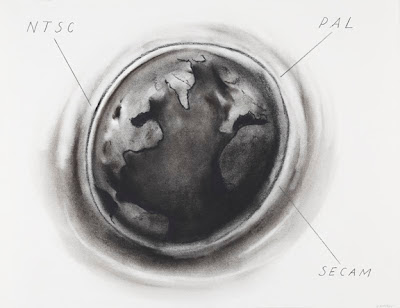 Playing both mischief maker and professor, Boeskov shifts between campy sci-fi pastiche and critical examination. Using a futuristic iconograpy, drawn from new technology and popular science fiction, He seeks to expose a new “technological sub-consciousness” where violence and mind-control dwell. Diagrams, drones, and robots in search of love populate drawings discussing topics ranging from big data to internet dating.
Jakob Boeskov (b. 1973). He has exhibited work at Stedelijk Museum in Amsterdam and Frankfurter Kunstverein in Germany and was recently the subject of a large retrospective at the Danish National Gallery.
Another recent project worth noting,  "T7" (Pork Salad Press 2012) , is a collection of Boeskov’s drawings which accompany a record by Timothy DeWit (Gang Gang Dance) and Matthew Morandi (Stagg). The book/record project will have a reception at The New Museum on Sept. 26th, 2012
ALSO!
MICHAEL BROWN
OK SON! 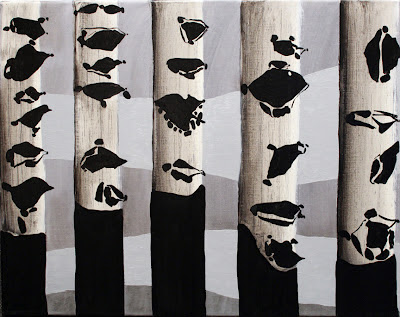 Michael Brown was raised on a small farm in Oklahoma where he learned to fix the motors of abandoned cars and pickup trucks and to appreciate the sunsets and spring rains offered by the surrounding landscape. His artwork reflects the quality of light and space particular to these memories, as well as his current day-to-day experiences living in New York City. His paintings develop through his drawings, which are indebted to his early fascination with Native American ledger art in its economy of means used to convey complex subject matter and ability to produce meaning from even the smallest gesture of line and color.

Michael Brown resides in the Lower East Side of Manhattan. He received his MFA in painting at The Tyler School of Art and a BFA at the San Francisco Art Institute, as well as an AFA degree from the Institute of American Indian Arts.
This is his first exhibition at Mulherin + Pollard.