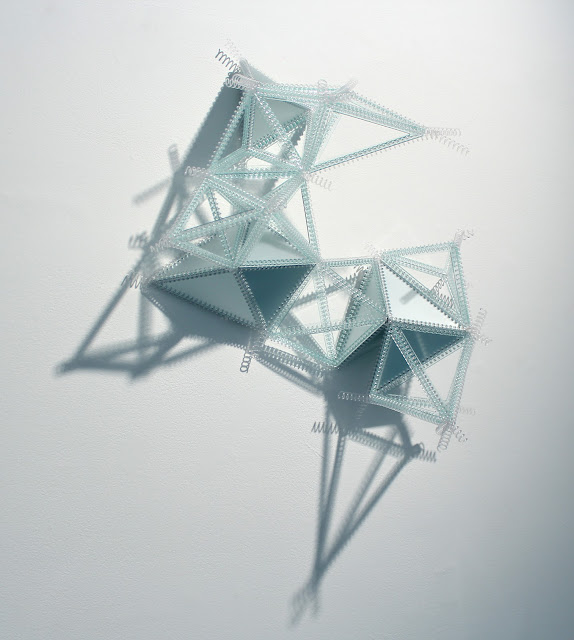 My new pieces have been inspired by my ever-shifting relationship to Silicon Valley. Using local corporate architecture and all the aspirations and attitudes it embodies, as a jumping-off point, I've been experimenting with a variety of structural systems in small-scale sculptures. With these modular structures I aim to convey a sense of the limitless ambition and “fake it tilll you make it” optimism of startup-culture– a striking counterpoint to the forced exodus of many longtime residents of the region. I intend for these pieces to serve as subjective, abstract distillations of my interpretations of the Silicon Valley zeitgeist.

Shannon Wright is a sculptor and installation artist based in San Jose, California.
Born in Baton Rouge, Louisiana, Wright grew up chiefly in Sydney, Australia, and then in Richmond, Virginia, where she received her BFA from Virginia Commonwealth University in Sculpture in 1990. She earned her MFA in 1994 in Time Arts from The School of Art Institute of Chicago. Recent exhibitions include Beyond Borders, Stories and lm(migration), a group exhibit at Santa Clara University (Santa Clara, CA), Untitled Art Fair with ADA Gallery (Miami Beach, FL), Dallas Art Fair with ADA Gallery (Dallas, TX), and Shannon Wright: Heroic Measures, a solo exhibition at ADA Gallery (Richmond, VA).

Wright's work has been recognized by numerous awards, including multiple California State University Research Grants in 2017, 2015, 2011 and 2006, the Silicon Valley Creates SV Laureates Award, and two Illinois Arts Council Fellowships. Her work has been featured in publications such as Hi Fructose and Hyperallergic, and she has given public lectures at UMass Amherst, San Jose State University and Kuvataideakatemia, the Finnish Academy of Fine Arts, among others.